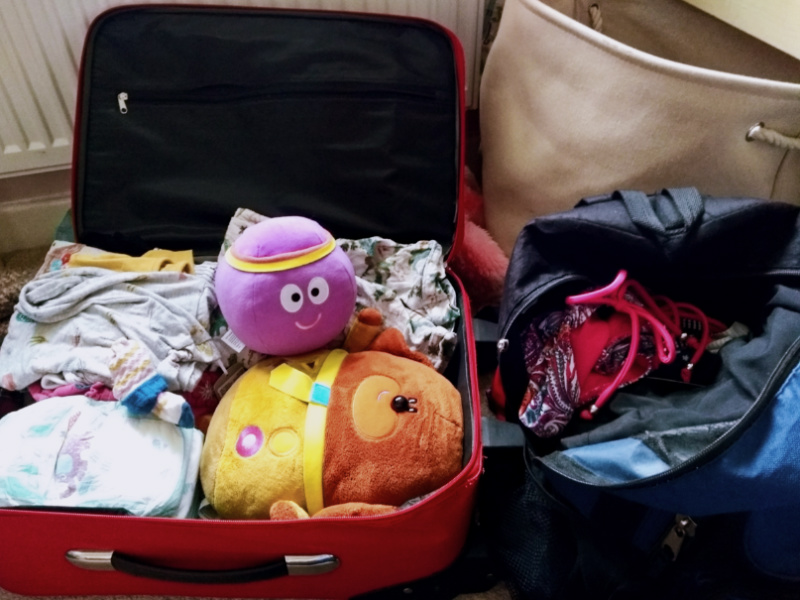 I should be clear from the start, I’m not about to solve the problem of packing for kids in the space of one blog post. Sadly there is no definitive list. I do want you to know that you are not alone in finding the whole packing for kids thing a nightmare. Hopefully I will be able to offer a few tips and words of comfort to anyone about to come up against this monumental task.

The reason packing for kids is on my mind is that we are taking as short trip next week. The trip is so short in fact that we’re away for just one night. Not only that but we’re heading for a family orientated hotel to do family activities. In theory that should cut down on the worry. After all there will be highchairs and travel cots at the very least. Yet there’s still so many things to think about. How many nappies will they get through over the course of two days? What snacks will I need? How many changes of clothes is to many?

With that in mind here is my guide to packing for kids:

There’s two options here. Option 1 is to carefully write a list for each member of the family detailing exactly what they need and carefully pack each item into an appropriately sized bag at least two days before your departure. Option 2 is to leave it to the last minute, panic and throw everything you see at your bag. Fill it up too quickly and end up packing several plastic bags full of random toys you suddenly believe they cannot live without.

I tend to lean towards option 2. It doesn’t matter how organised I intend to be (I do at least try to get it done the night before). There’s always so much to pack in the morning. I don’t just mean everyone’s toothbrushes and Ted’s blankie. I mean the clothes that you simply must take which you only remembered to wash the day before and were still to damp to pack.

When packing for kids don’t forget the snacks, we always have a large bag for life with kitchen utensils and food. (We don’t want to have the no bottle opener situation again!) And don’t get me started on baby milk – sterilised bottle, powdered milk, the steriliser itself, pre-made milk. The list goes on and none of it can be packed in advance.

Pack for your mode of transport

Sounds obvious doesn’t it? But what I really mean here is if you’re driving then go crazy! Chuck everything in. Highchair, cot, pushchair, clothes, spare clothes and more spare clothes. As many toys as you need (so all of them) and don’t forget the kitchen sink.

If you have to travel on an aeroplane things can be a little more tricky as at some point you are going to have to carry everything plus the children. This is especially the case if you are flying low cost. What we like to do in this situation is take extra family members to act primarily as pack horses for all their stuff. Despite this we usually have to leave the kitchen sink behind.

If I’m honest, none of this is good advice. However, I know it can seem like you have to pack everything and we’ve been burned when we haven’t. We once left the travel cot at home for a two-day break because we were told there would be one in our cottage. On arrival we found that they didn’t have one available. We made Ted a bed on the floor out of the spare duvet and pillows.

I take at least one spare pair of underwear just in case and I’m unlikely to wet myself. So how many spare pairs to I take for the kids? Well actually none, they are both still in nappies. But nappies leak, children play in mud and they are incredibly messy eaters. They can easily need 2-3 outfit changes a day just to stay looking respectable. On top of that there’s nightwear and spare pyjamas are another essential. It’s a wonder there’s ever any room left for me to have a change of clothes.

This doesn’t even consider the shorts vs trousers debate. Which leads me to my next point…

Pack for the weather

Another obvious one perhaps, if you’re heading somewhere hot you’ll need shorts, t-shirts and hats etc. However, if you are travelling within the UK or even Northern Europe the weather is rarely that predictable.

Again I’ve been caught out here before. We went to Germany to visit my sister-in-law twice in fairly quick succession. The first time we went in January so we were all dressed in layers upon layers including Ted who wore his snowsuit on the plane. The bags were all packed with yet more layers.

The second time it was April and had been relatively mild in the UK. This time we were travelling without the aforementioned pack horses (I mean extra family members) so we took fewer bags. Also this time Ted didn’t have a snowsuit. This time we not only forgot to pack Ted a coat, we didn’t even pack him any jumpers. At one point we went for a family walk in the park only for it to start snowing. Packing fail.

Toys – Are they necessary?

I mean surely you’ll be having so much fun out doing activities that you won’t need any. Absolutely not, you need as many toys as you can fit in. The chances are you’ll be spending a fair amount of time in places where children need entertaining. Your accommodation for a start. Imagine the first two hours of the day and the last two at night without anything for them to do. Shudder.

You will also need some entertainment while they travel. We favour a tablet or phone with episodes of Hey Duggee and The Go Jetters downloaded to it. Cbeebies also come to the rescue for dead time in restaurants and cafes with their magazines. Again we favour Hey Duggee, The Go Jetters and Andy’s Dinosaurs. Each one has layers of entertainment so can extend to a whole meal time. First the crappy toy, then the stickers, then colouring/motor activities and finally the stories.

Which reminds me you’ll need at least one bedtime story.

Here’s how it will probably go for me next week when I pack for one entire night away. On Wednesday I will start off optimistically but quickly realise I can’t pack with the kids around. Ted likes to help!

“Mummy we can’t go without this” (adds a bit of the hoover to the suitcase) “and Mesmay will need her toy” (struggles to pick up biggest toy she owns).

I will give up until after bedtime. At this point I will remember all the clothes (even the grown-ups) are in May’s room. After a lot of tiptoeing I will survey the piles, think there’s too much there and add more anyway.

It’s time to put it all in the suitcase. It’s only one night so we should be ok to just have one bag between the four of us. I will also work out how many nappies I will realistically need for two days and put these in the nappy bag. I will then add a few extra. There’s not much else that can be done the night before so wine and bed.

Morning. There’s so much to do! David will announce a ridiculous departure time then disappear to do some (no doubt essential) jobs on the farm. Leaving me to remember all the last minute things with two children screaming at me. I would love to say I’m exaggerating but it’s been the same every time we’ve been away for the last 5 years.

We will leave 30-60 minutes after our intended departure time, both a little stressed. I will not be wondering if I’ve forgotten something but what it is I’ve forgotten.

My Packing for Kids Plan

Wish me luck and I’ll let you know how it went when we get back (here’s the update).

Do you have any useful or not so useful packing for kids advise?

(We were heading to Cbeebies Land once I finished packing. Read about the good stuff from Day 1 by clicking here)