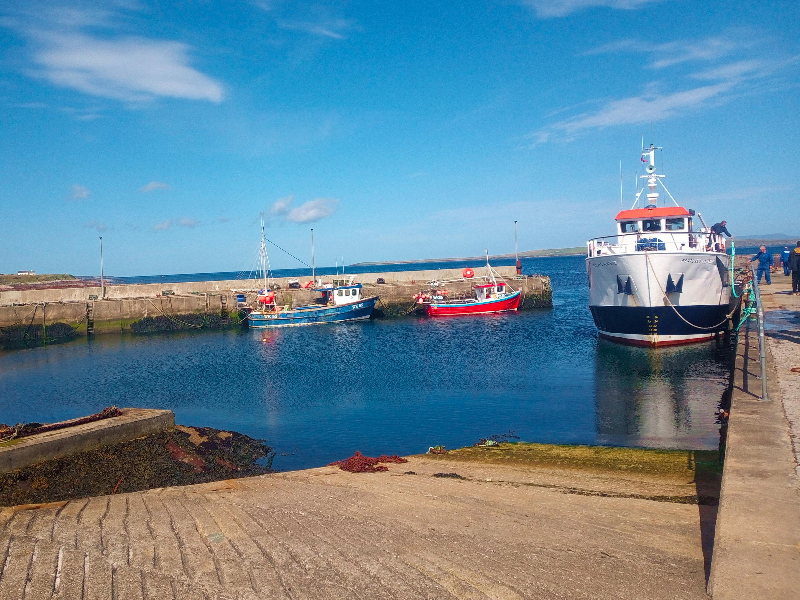 John O’ Groats is a strange tourist destination with some unusual quirks. It should be like reaching the ends of the Earth, and in many ways, it is, but the end of the Earth is a floodlit car park and a dozen kitsch shops. Half the tourists in Scotland have also made their way here. There is a charm to the place, though, and if you are willing to stay longer than the time it takes to take a photo of the sign, you will find a treasure trove of things to do.

We stayed for two nights at the attached campsite, so we spent plenty of time exploring the area. We found lots of lovely walks and places to visit.

Things to Do at John O’ Groats

It goes without saying that most visitors to John O’ Groats are here to have a photo with the signpost. It’s easy to do. The sign is on an elevated patch overlooking the harbour. You will probably have to wait for a bit of time for your turn as there is a crowd around the sign all day with new visitors turning up at all times. Even strolling by at night, several groups arrived for their picture.

At first glance, John O’ Groats has the energy of a service station. It is a large car park surrounded by shops. Most of the shops are gift shops aimed at tourists. You can purchase all the tourist tat you want here. We bought postcards and sent them using the post box in one of the shops so that they would have the John O’ Groats postmark.

There are a couple of cafes, a fish and chip van and an ice cream parlour. We tried a few options while there, and all were fine. They all had pretty limited opening hours so beware of that if you are arriving early or late.

Some food outlets only accept cash, and there are no cash machines at the site, so make sure you come prepared.

One of the best experiences at John O’ Groats was boarding a boat and heading a bit further north. The boat took us to the southernmost Orkney Island of Stroma, where we saw countless seals lounging in the shallows and seabirds basking on the rocks. Our excursion began at the dock just below the signpost and lasted 90 minutes. The trip’s highlight was spotting a pod of dolphins fishing on the incoming tide not far offshore.

Wildlife Cruises from John O’ Groats Ferries can be booked in advance online or reserved at the office at the signpost.

One thing not enough people talk about when visiting John O’ Groats is the beautiful beaches a stone’s throw away from the harbour. Scotland has some of the most unspoilt beaches in the UK, including the northern coast. If you turn right at the signpost and head away from the car park, you quickly follow an isolated coastal path. The beach here is a mixture of rockpools, rare seashells and sand. You are also likely to spot a seal or three popping their heads above the waves to watch you pass.

Things To Do Near John O’ Groats

If you are staying at John O’ Groats for a few days then there are plenty more places to visit in Northwest Scotland within a 1-hour walk or a 30 minutes drive of John O’ Groats.

Keep going along the coastal path mentioned above for about an hour, and you will reach Duncansby Head Lighthouse. The lighthouse is typical of the lighthouses you will see all along the Scottish coast, so most people come here for the sea stacks. These pointy wonders are worth making a detour to visit. I have to confess, I didn’t know there were sea stacks close to John O’ Groats until I saw them on many of the souvenirs in the gift shops, but I am glad we had time to see them for ourselves.

Duncansby Head is also accessible by road with a car park at Duncansby Head Lighthouse. From here, there is a short walk down to the best viewing point for the stacks.

It is an open secret that John O’ Groats is not the most northerly point of the British mainland. This can actually be found half an hour down the road at Dunnet Head, and there isn’t a gift shop in sight. Dunnet Head is managed by the RSPB for seabirds. It has everything you expect from the North of Scotland, stunning views, wildlife, and terrible weather while we were there. The views across to the Orkney Islands and the landscape you pass through on the journey to this spot make it well worth it, in my opinion.

Castle and Gardens of Mey – The Queen Mother’s Castle

This trip was full of surprises, and the final one for me was the Castle of Mey. Situated between John O’ Groats and Dunnet Head, this is a delightful stop on a tour of the north coast of Scotland. This stately home was the favoured residence of the Queen Mother until gifted it to a trust in 1996. The gardens were putting on a stunning display during our visit in August. It was really impressive to see what the gardeners were able to grow in the extreme north of Scotland.

The gardens were small enough to keep the children entertained but they were more interested in the petting farm. The farm has a full range of domesticated animals.

Find out more and book tickets on their website.

Adjoining the John O’ Groats car park is probably the most northerly campsite on the mainland of the UK. John O’ Groats Caravan and Camping Site have a few hardstanding spaces for caravans and motorhomes and plenty of grass pitches for tents. It has all the basic amenities you need in a campsite including a laundry room, toilet block and electric hook-ups. There are also great views of both the nearby Orkney Islands, which look very cool at night with all the lighthouses lit up, and the next door floodlit car park.