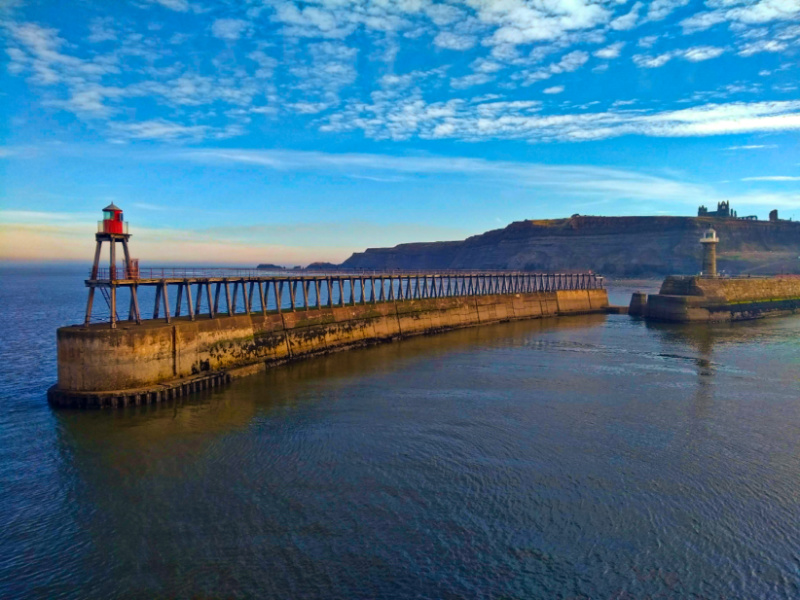 There’s so much to do in Whitby making one of the best seaside towns on the North Yorkshire coast to take the kids. The beach is perfect for sandcastles, exploring caves and riding donkeys. In the harbour you can hop on a boat ride or watch the bridge open. A walk on the harbour wall is another must. Whitby museum is fab as well, featuring everything from fossils to hundreds of model ships. (Click here for tops on visiting museums with young kids). All this is without ascending the 199 steps to the Abbey or climbing the other side of the bay to have your photo taken with the whale jaw bones.

We had a wonderful few days in the town. You can read more here about unusual things to do in Whitby.

Staithes has everything young children want from one of the top seaside towns of the North Yorkshire coast. A cool harbour to explore, rock pools, fossil hunting and most importantly it’s the setting for a CBeebies TV programme.

The town is a warren of alleyways and small cottages. The main consequence of this is that you can’t drive down into the town, there’s simply nowhere to park, it’s hard for two cars to pass in opposite directions and there are few places to turn round. This means you have to park at the top and descend a very steep hill.

We went down to Staithes for a sunset walk as the tide came in. It was a brief visit to the rock pools but we enjoyed a walk along the harbour walls, spotting the sculptures and sussing out the general vibe of the place (it definitely has a vibe). We’ll be heading back next time we’re in the area.

Robin Hood’s bay is another seaside town that has it all. Magical, twisty roads leading down to a bay with numerous rock pools and cliffs for fossil hunting. As with Staithes you have to park at the top and walk down to the beach. The walk is steep but picturesque, past quaint shops and buildings full of character.

We arrived just as the tide was starting to go out so we had to carry the pushchair up and down a lot of steps to get to the beach. On the way back it was much easier as we could get round to the boat ramp. We spent the morning exploring the beach and rock pools. Another time we could have spent the day here but the kids were tired from a few days of exploring so we headed off just after lunch and they slept in the car all afternoon.

Scarborough is another of the coastal towns of North Yorkshire with plenty to do. The main town has all the things you expect at the British seaside but for us it’s the North bay that makes this town special. Peasholm Park is a labyrinth of follies and points of interest. The North Bay Railway that takes you round to the SEA life centre is fun and the beaches are some of the best.

We spent a few days in a holiday apartment right on the beach in the North Bay. It turned out to be the perfect spot to explore from.

Which of the seaside towns of the North Yorkshire Coast is your favourite? Which ones have I missed?